Telma and Luisa (aka Donna and Linda) are back home, resuming their normal lives.  My car ride from Providence to home on Sunday evening was about 4.5 hours, and I arrived home to Cat, Martin, and Theo visiting us.  Home sweet home. . .family sweet family!

So as I usually do, here are my final looks at the places, faces, and foods that might not have made it into a regular blog. 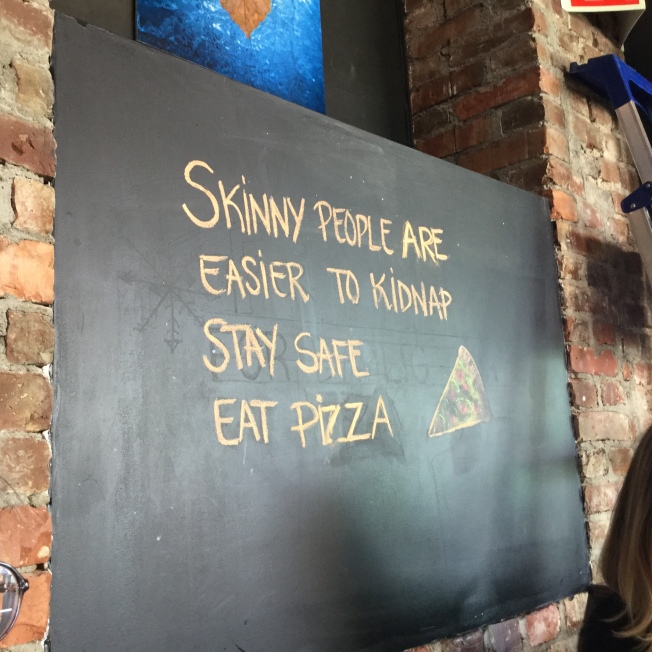 We were surprised to learn that Bergenese mostly like pizza or tacos. Guess you can only eat so much fish and potatoes!

Trolls do their mischief at night and turn into stone during the day. Wouldn’t want to meet this guy in the dark!!

We noticed more than one guy sporting this long, long silky hair. 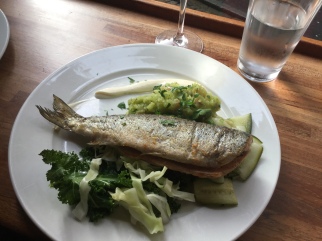 Randi, the 83-year-young woman whose kitchen we visited for lunch. She seemed pleased and mildly amused that I had knitted her two dishcloths and gave them to her as a gift. 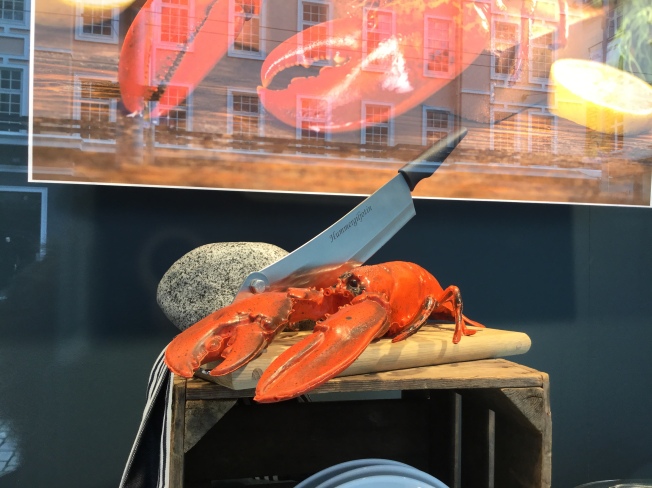 A kitchen tool we’ve never seen before. . .a lobster guillotine!

A final toast to a very fine spot in the world. 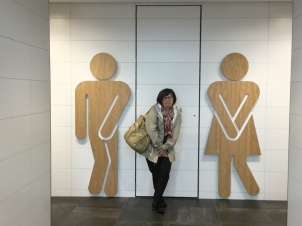 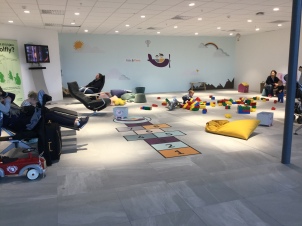 The very efficient Light Rail whisked us back to the airport, a 45 minute trip.  We got a chuckle out of the signs for “Men and Women” bathrooms, and found a very civilized playroom in the airport for kids and parents.

We arrived home tired and very happy.  Yet another adventure in the ongoing saga of Telma and Luisa has been added to our growing collection of small towns, cities, spas, food tours, countries,  wow moments, small pleasures, and simply the satisfaction and joy of two friends enjoying life . . .and each other!! 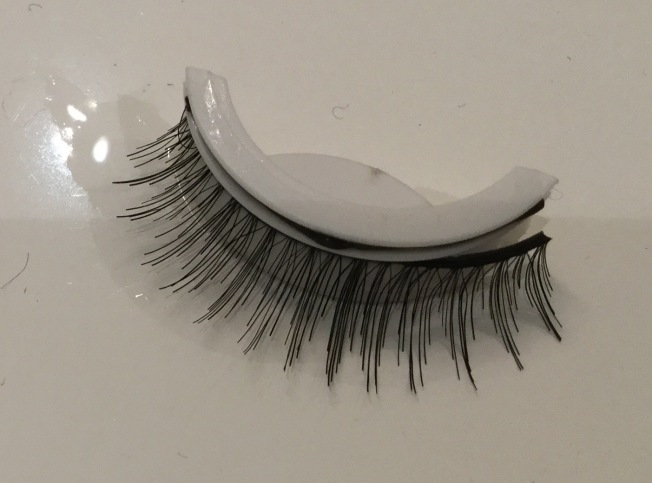 Now, having grown up in conservative circumstances and having lived 67 years without the benefit of knowing how to apply these little buggers, Luisa first watched Telma (the younger of the two) and listened to her instructions.  “Put them right on the top of your eyelid, and you may have to tweeze off a few extras.”

“OMG, you must be kidding me!  I can’t even see, and with my cataract lenses I can only see with one eye close up!!”

“So do they have to both look the same?  Can I just fill in with a little bit of eyeliner?” Asks Luisa.  “That’s the spirit,” says Telma.

“I think they’re on but one eye is droopy.  Who the heck cares or will even notice!  As long as we can see and keep each other from falling flat on our faces in the street (. . .but oh, that’s another story which will NOT be for another time!!),” muses Luisa. 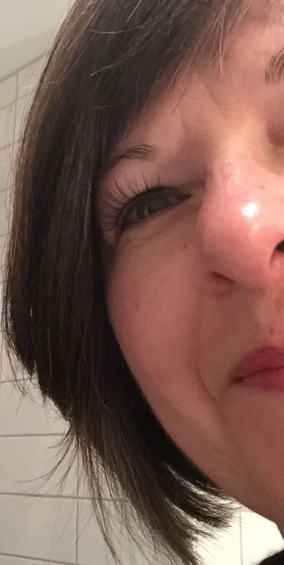 Just another fun chapter in the adventures of Telma and Luisa!!

GRAY is what you might think of when you realize that Bergen receives 275 days of rain per year.  In fact, we’ve had rain parts of every day we’ve been here, varying from downpours to light spritzes. 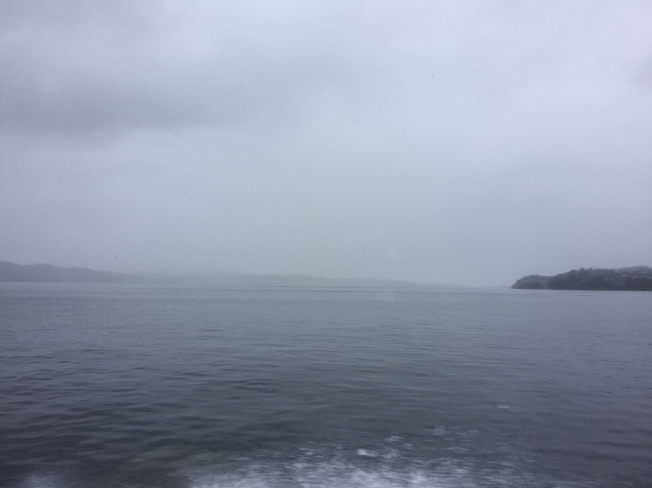 But I was struck by the abundance of happy color throughout the town! 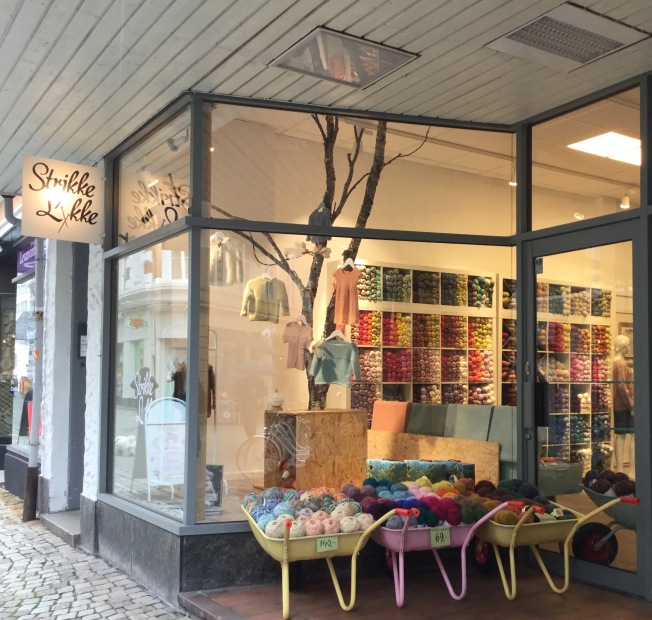 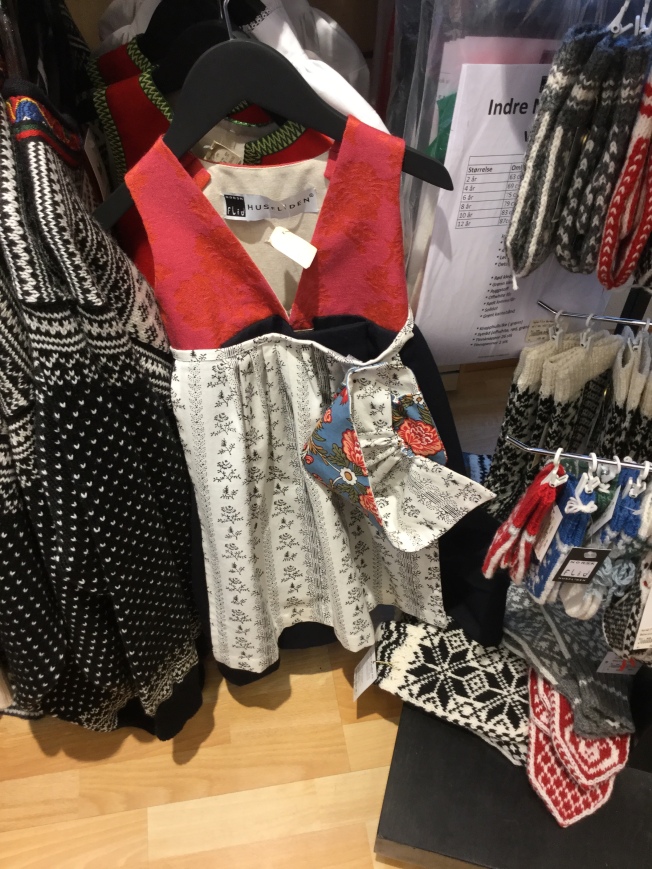 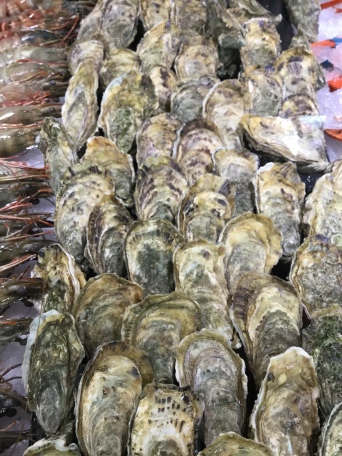 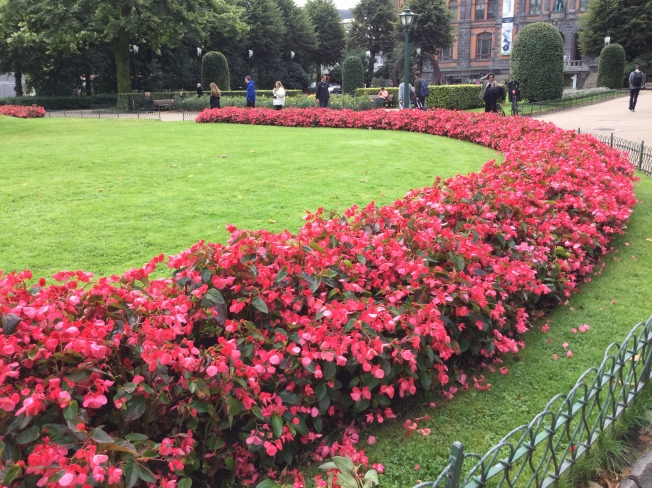 A LITTLE SLIDE SHOW FOR YOU!!

To borrow a phrase from an almost-forgotten IQ test I used to administer, “Is it a necessary and integral part of ___________?”  If the question is Norway + fjords, then the answer is most definitely “Yes.”  Today we explored the Osterfjorden.

A three-hour trip took us up to the head of the fjord where the village of Modalen is the second smallest in Norway with a population of 372. 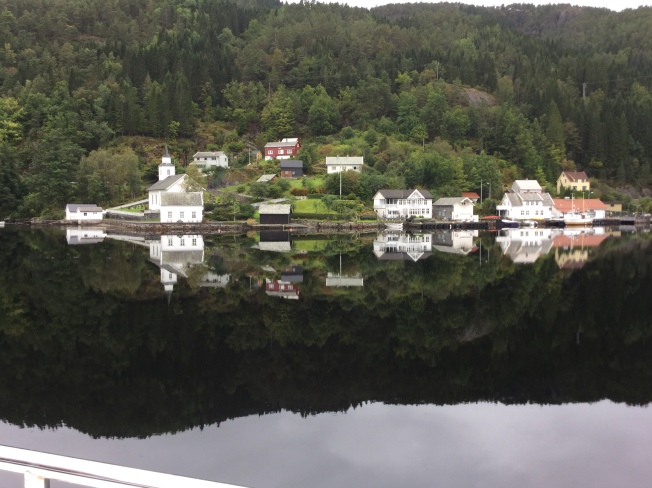 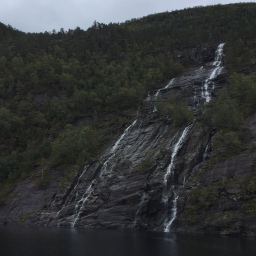 BRACING was the word we used to describe the wind and weather!

And amongst the towering rock cliffs, I discovered the “Mountain King” from Peer Gynt!

Once a year Bergen celebrate “Kulturnatt” and we just happened to be here for it. Museums are open and free, boats feature jazz groups, soup, or just an invitation to come aboard and browse. Street performances, local dance groups, firemen brigades. . .everyone gets in on the fun. We did, too!!

As for me. . . I think I may have joined the crew of the D/S Oster. I have orders from the captain to learn their sailing song, in Norwegian, before I return!! 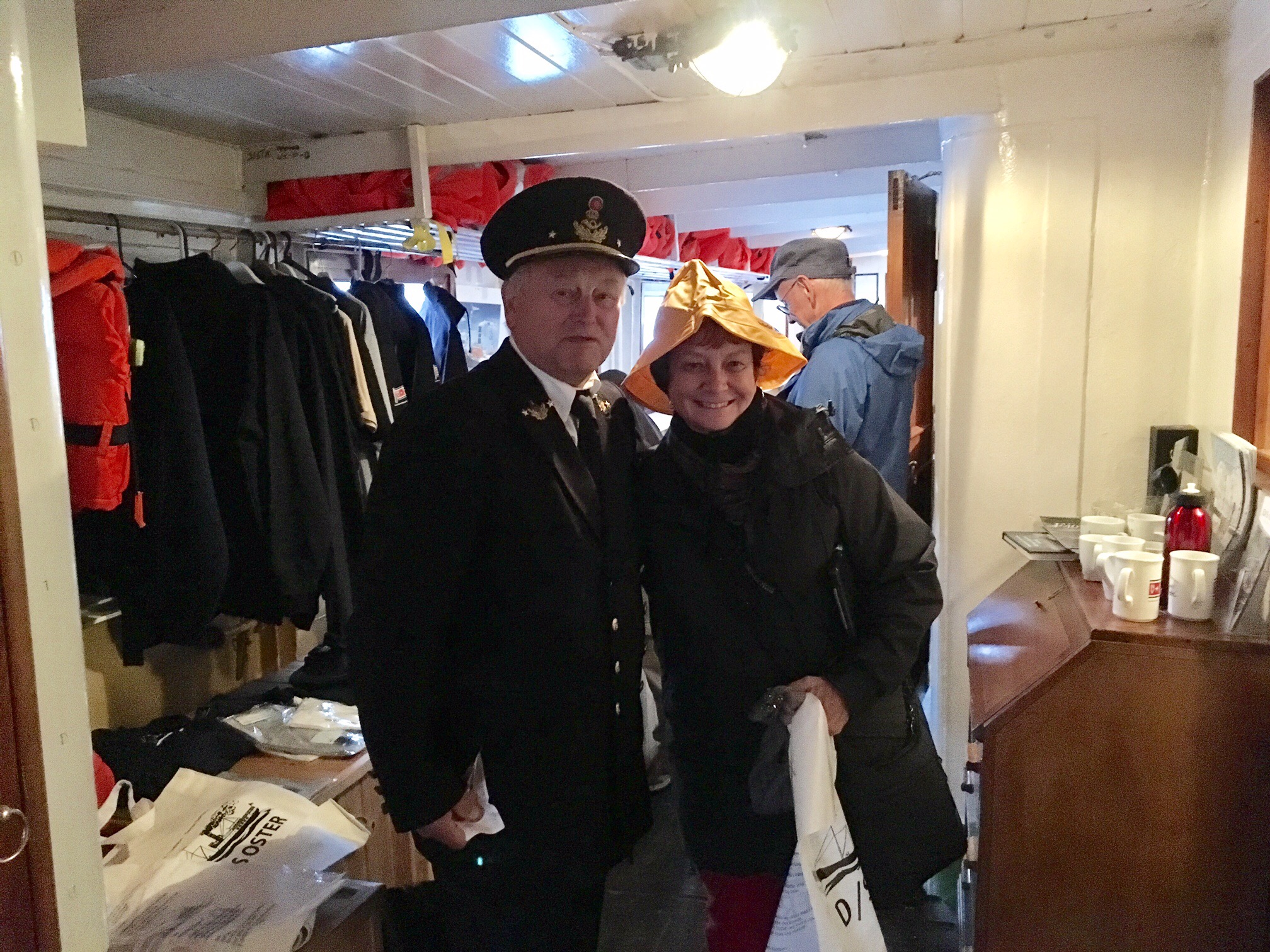 Not far from downtown Bergen is Troldhaugen, or Troll Hill, the home of Edvard and Nina Grieg. We learned the details of his life (tuberculosis at an early age, collapsed lung, breastbone 2″ thick when he died), death (he and Nina were cremated which was practically unheard of and is still not in the Norwegian psyche), and music (with early stints in Leipzig and connections to the wonderful composers and musicians of his time; best known for his Concerto in A Minor and the Peer Gynt Suite written at the request of Henrik Ibsen).

We toured the downstairs of the house which is open to the public. But the highlight of the day was the daily lunch-time concert in the concert-hall which overlooks the lake. We were extremely fortunate to hear Einar Steen-Nekleberg who is the chairman of the Grieg Piano Festival and known as one of the world’s best interpreters of Grieg’s music. 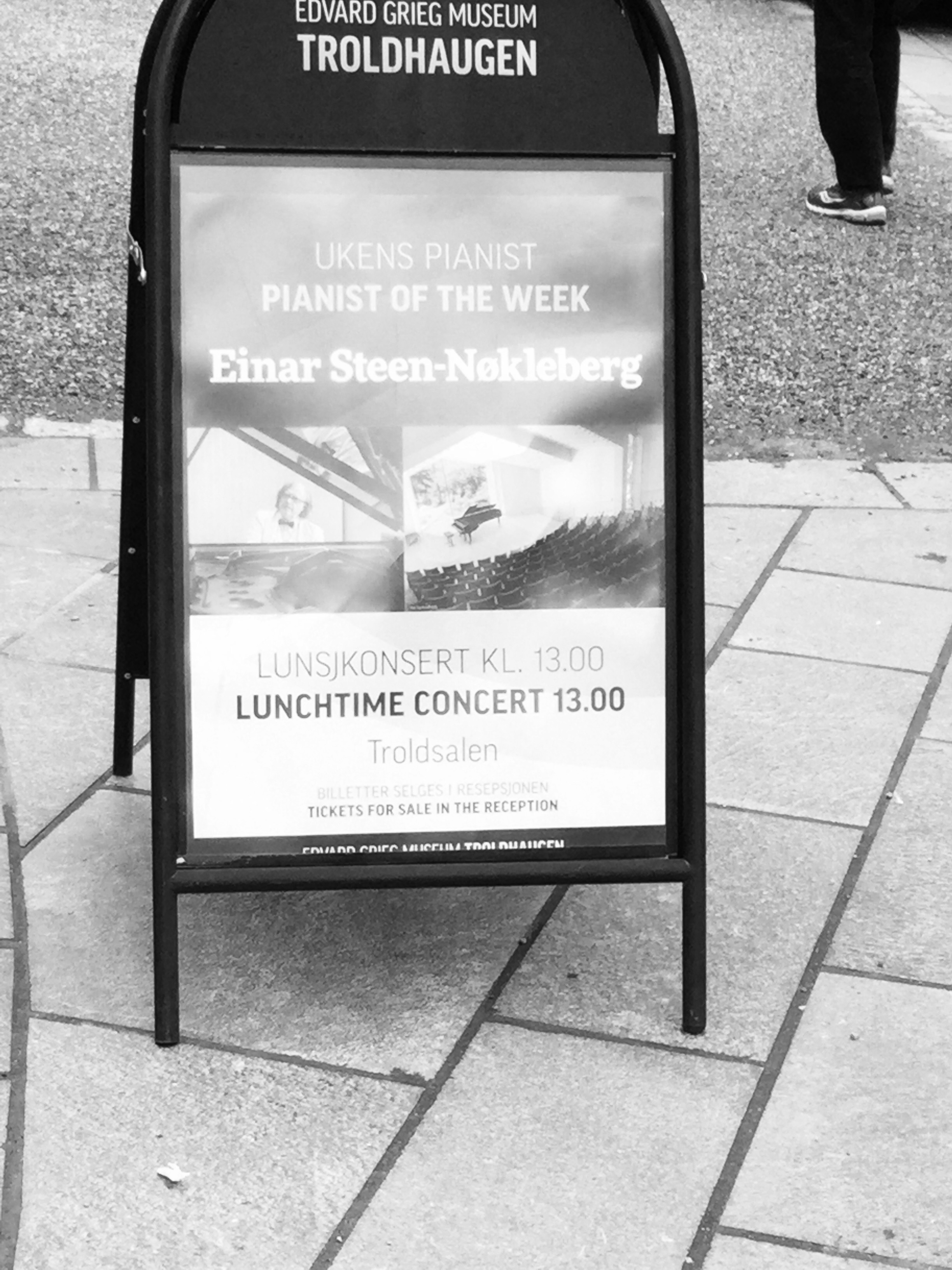 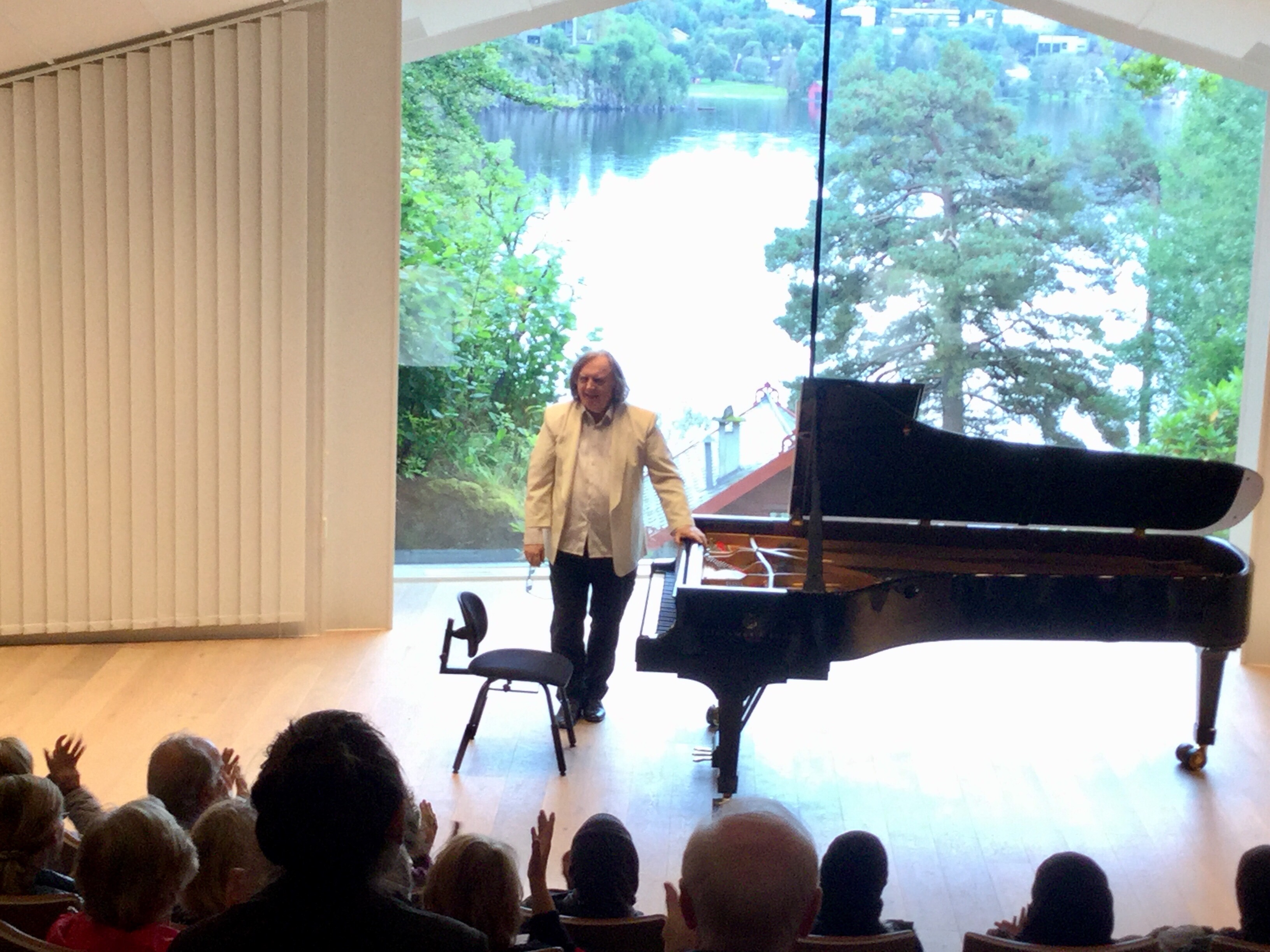 Honestly, Donna and i both commented that it seemed at some points that the currents in the lake corresponded to the tone of the music being played. We were fortunate, indeed!

This might just be a good time to post photos of an amazing window display we happened upon yesterday.

So the entire text of Peer Gynt is being knit into sweaters! Here’s the website to see all of them. Peer Gynt Sweaters

But back to Grieg. He had his own “man cave” by the lake where he wrote and composed, and hearing his works in this most Norwegian setting really reflected his love for the land and his ability to convey its beauty in music.

His spirit is certainly alive and well in the concert hall and the lovingly preserved home and surroundings.

Probably one of the best ways to get to know a city is to take a guided food tour. We booked the only one in town. . .Bergen Food Tour. Created and run by Cheyanne Smart, we experienced everything from a Michelin-star restaurant to street food. Highlights included:

Bergen Fish Soup at Lyskverset–created by Chef Chris Haatuft and it’s as authentic as it gets. We learned that fish soup with shellfish, salmon, or other chunks of fish is not historically correct. This one is apparently the most authentic. It’s topped with house made leek oil. The sourdough bread with its crisp crush and butter (made from just one particular cow’s milk) was heavenly. Chris is impeccable in his procurement of only the best local ingredients. 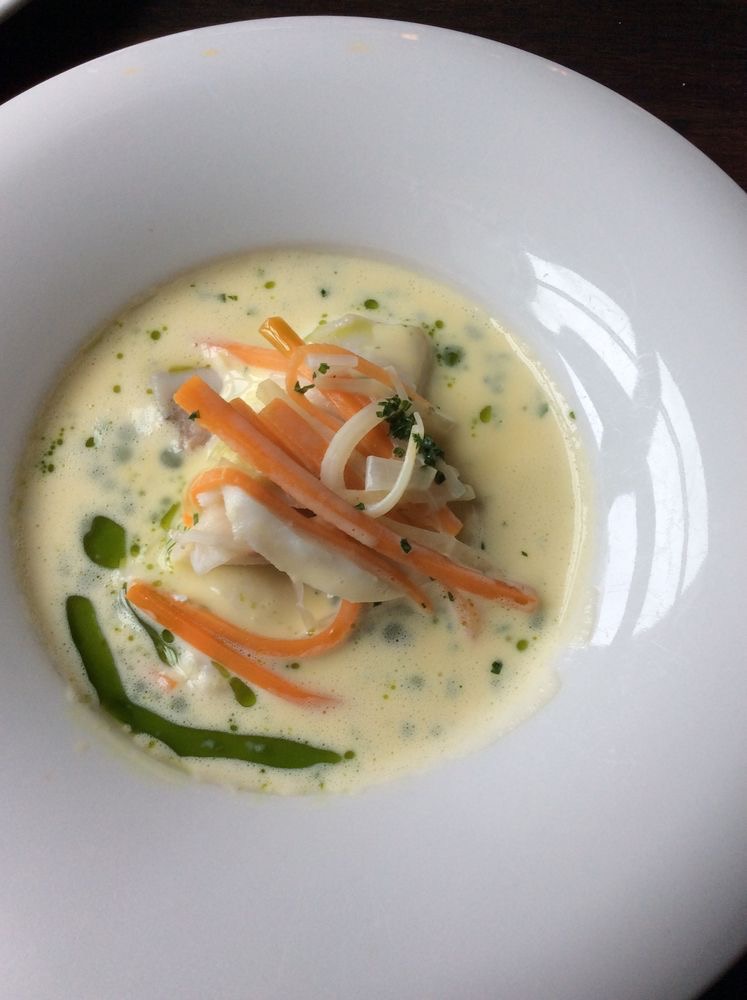 Brown cheese. . .who ever heard of brown cheese?! It’s the curd that remains from boiling down milk and is currently all the rage in Bergen. Cheyanne took us to the only French bakery in town to try their brown cheese cheesecake.

Bergenese are not much for sweets, and this patisserie is one which most locals don’t even know about. The array of cookies and sweets is a new concept for this town. BTW, the brown cheese cheesecake was interesting with a carmel flavor, and the blueberry-raspberry jam accompaniment added a nice juiciness. We learned that most years the jam would be made only from blueberries but this year there was so much rain they had to throw in some raspberries to make it all work.

Got FISH? Hey, it’s Norway and that’s who they are! The fish market underneath the Tourist Information Center is one of the best in town, and this family Fjellskal has been in the business for decades. Their fish is only of the highest quality, and we got to taste it all!!

We sampled everything here. . .

The season for wild caught salmon is coming to an end. Norwegians will buy it now and freeze some for Christmas or May 17, which is like our July 4th.

Next stop–a restaurant called Vare Vestland to sample Plukfiske. . .a combination of fish, potatoes, butter (main ingredients in Norway), and then to give it a bit of flavor, some local bacon and pickled leek (veges here are pickled to preserve them). Heavenly!!

At this point we were about filled, but we had to get a taste of local brews, so off to a local bar (which could only feature “cold brew” aka “iced coffee” outside) since beer can’t be advertised. But inside. . .

We were very full of food and drink, but there was one more stop to be made.

This all-night eatery features sausages of every kind but hey, we’re in Norway so we did what the sign told us to do. . .

Cheyanne assured us that truly, this IS the place where all the locals come, and even chefs like the Michelin-starred Chris from Lyskverket will show up here with his chef buddies when the night is over. The tradition is to eat the reindeer sausage with some lingonberry jam, fried onions, and mustard. OK, now I know what to do with that lingonberry jam I got at IKEA!!

The food tour concluded 3 hours after it started. If you’re in Bergen, Telma and Luisa heartily recommend it. You’ll get a good walking tour around the city, a lot of history and local lore, good food, good drink, and new friends.